The Chesterfield Golf Club was founded in 1897 and its first members played a course in Somersall Park - just over a mile from the club's current home.

The club moved to its present site in 1906 when Somersall Park proved too short.

The original Walton course consisted of nine holes, taking in much of the land now occupied by the first six holes together with some which is now a public recreation area.

In the late 1920s the club acquired Yew Tree Farm and the course was played much as it is now.

In May 1939 - four months before war was declared - work started on a new clubhouse to replace the original wooden building, it was opened in December that year. Meanwhile the Ministry of Defence had requisitioned some land which meant just nine holes could be played.

In 1942 the famous Henry Cotton played an exhibition game against three local professionals to raise money for the Red Cross - photos of this event remain on display in the Clubhouse.

When the War finished, the Club obtained its land back together with £738-3-0 compensation for any damage.

In 1952 the present seventh and eighth holes were added and the dangerous 'Murder Alley' had been consolidated into one hole, the present ninth.  The new practice putting green came into use in the summer of 1955.

Access to the club was through Riggotts Lane until 1959 when a new two-way road was created on the old exit to Walton Road.

Over the years the clubhouse was improved and enlarged creating new facilities for members and adding the new entrance hall, professional shop and secretary's office which is as it is today.

Various improvements have been made to the greens in more recent times, including a total rebuild of the seventh in 2003 and eigth greens in 2006. Work has also been undertaken on the men's and ladies locker rooms together with a 'new look' clubhouse with updated decorations and furnishings and a new bar.

The view from inside the clubhouse over the surrounding countryside is unrivalled by any in the county.

What's in a name?

An early nod to Chesterfield's most famous landmark, 'The Crooked Spire', can be seen when approaching the first green. The iconic spire is incorporated in the golf club's badge. Although only a small part of the present course lies within the borough of Chesterfield, with the majority in the dirstrict of North East Derbyshire, many of its members live and have businesses within the town. The coat of arms of Chesterfield Borough Council also includes a Crooked Spire design.

Standing proudly on the distant skyline to the left side of the fairway is Bolsover Castle. It was built by Sir Charles Cavendish in 1613, on the site of a Norman castle.

The club has been a member of the Derbyshire Ladies Golf Club's Association and a Member of the Derbyshire Union of Golf Clubs for many years and several club members have held high office of President and Captain in those organisations. Many club members have played for the county teams . It would seemed right to name a hole, based on the county mascot, to record these links.

An Ordnance Survey Map of the area published around 1840 shows Grange Wood covering an area including the current fourth fairway. Many older members will remember Grangewood Farm situated to the rear of the third green.

To the right of the men's medal tee and behind the ladies back tee is a stoop, or stone post. It is likely that it has stood sentinel in this position from at least as long ago as 1906 when the course was laid and was one of two gateposts into field, which is now the seventh hole, prior to 1952.

A feature of this hole was once hillocks or mounds in front of the tees. During the Second World War it is reported that the Home Guard used the old clubhouse as a post and used the mounds as butts for shooting practice. The word is derived from the French word Butte.

Looking from the tee in a north-easterly direction and just below the skyline can be seen one of most famous historic buildings in Derbyshire. Completed in 1597, Hardwick Hall was built by Elizabeth, Countess of Shrewsbury sometimes referred to by historians as Bess of Hardwick - Granddaughter of James IV of Scotland and the Great Granddaughter of Henry VII.

From 1907 to 1937, part of the golf course was on land to the left of the current eighth hole. This land was known as Gorsy Knoll and was sold in 1939 to the Chesterfield Corporation and is now a public open space.

The present seventh and eighth holes were not developed until 1952. Previously, the eighth and ninth were played on what is now the ninth hole. With golf bails flying in opposite directions, the hazard which existed led members to refer to the area as 'Murder Alley'.

The Birdholme Brook, which crosses or bounds every one of the back nine holes, is an important feature of the tenth hole. A 'beck' is a brook or stream with a stony bed - a fitting description of this pretty watercourse.

The bunkers on the right-hand side of the fairway and at the greenside are a focal point for the second par five on the course and provide an appropriate name for the hole.

The Birdholme Brook is the pretty feature which lurks to the left of this hole - marking a watery out of bounds.

The name of this hole was conceived by mistake. It had been the intention to name it after the architect, Harry Colt, who designed the back nine holes and who designed many famous courses both in the UK and America. The first letter of the surname was mistakenly input and it became Holt. However, the name stayed in reference to the 'Holt', or area of woodland, which frames the hole's left side.

Within two miles of this hole lies Wingerworth Deer Park. Over time the deer would have roamed to the course's edge to drink from the brook which runs around its southern boundary.

On the Ordnance Survey Map of 1896 three fishponds were marked alongside the fifteenth fairway. The outline of at least one remains and can be seen to the left of the fairway immediately before the bridge.

The sixteenth green is the nearest point on the present layout to the original course of the club at Somersall which existed from 1897 to 1906.

Two of the outstanding features of this hole are the oak trees standing on either side of the fairway. They are both over 100-years-old and cast an imposing shadow across the fairway.

Named to marked the club's centenary year in 1997 this stunning par five is a fitting closing hole. 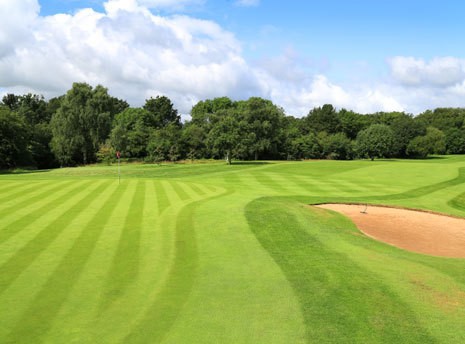 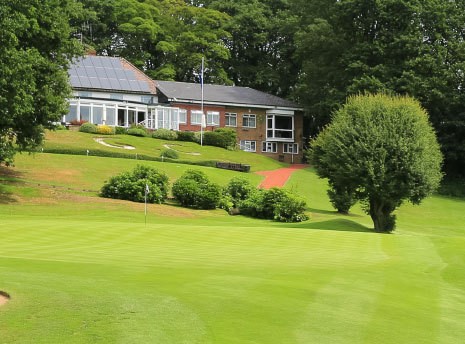 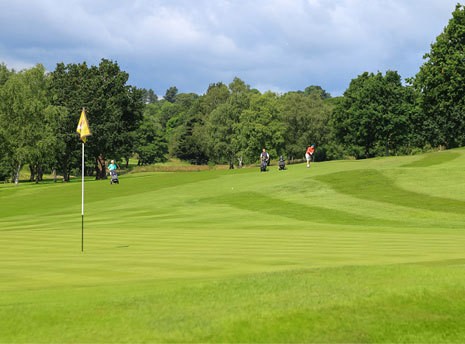 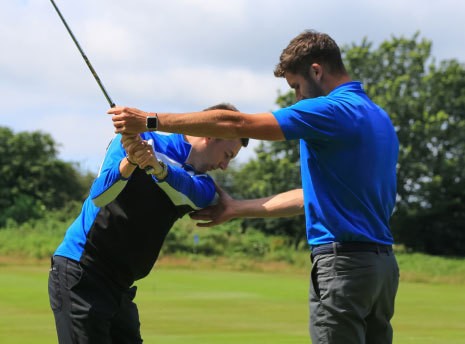